Proof of dog/s being licensed in your home municipality is required to complete your registration and receive a code for the gate.  Please email a copy of your current dog license to the Recreation Department at recsec@oakland-nj.org, or you can mail a copy to the Borough of Oakland, 1 Municipal Plaza, Oakland, NJ 07436, Attn:Oakland Dog Park.

Sometimes, a school project can have a lasting impact. In March 2009, Ryan Schwertfeger, an eighth-grade student at Valley Middle School in Oakland, had to complete a community service project as a graduation assignment. His family had just adopted a rescue dog, Scooby, so Ryan’s mother, Jill, suggested that he propose a dog park for Oakland. Ryan collected nearly 700 signatures on a petition 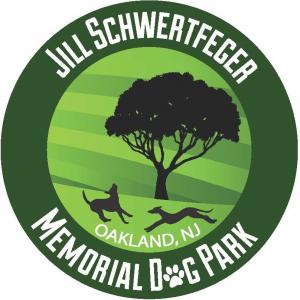 asking the Oakland Borough Council to create a dog park, and a group of supporters formed to back his efforts.

After the Borough purchased what is now Great Oak Park in 2011, the Borough indicated that a dog park could be built on that property, and Ryan quickly became involved with the volunteers who were developing the property into a public park. Sadly, Jill Schwertfeger died of cancer on August 13, 2012, but Ryan resolved to continue his dog park mission in his mother's memory.

Great Oak Park opened to the public in June 2015 and the necessary environmental approvals for the dog park site were obtained by 2018. Oakland officials told Ryan that if he could raise the money to build the dog park, the Borough would accept maintenance responsibility. An energetic fundraising committee of local residents and business owners formed the Dog Park Fundraising Subcommittee, off of the Borough’s Great Oak Park Committee, and raised about $50,000 in cash and about $55,000 of in-kind donations. Oakland’s Borough Council granted approval for construction in May 2020, and the Jill Schwertfeger Memorial Dog Park officially opened on Mother’s Day weekend 2021.

Unfortunately, Ryan’s dog Scooby did not make it to the ceremony, as he too passed away from cancer on March 23, 2021. Ryan and the Dog Park Fundraising Subcommittee members hope that this dog park will be a testimony to the many unsung heroes who, as Jill Schwertfeger did, give generously and selflessly to make a difference in this community.

The dog park is maintained using funds solely from the annual fees paid by dog park users and it is operated by the Borough through the Recreation Commission.