As you drive west along Route 208/287 approaching the Ramapo River, it is hard to imagine that 300 years ago this interstate highway may have been a quiet tree-lined path in a little valley used by the Minsi Indians of the Lenni Lenape tribe. The first Dutch settlers, who were stopped by the Ramapo River at the end of the path that is now Franklin Avenue, became so enamored of the area that they bought some 5,500 acres of it. On June 5, 1695, Arent Schuyler, representing a group of Dutch associates, paid the equivalent of 250 New York Pounds in wampum and goods to the Sachems of the Pompton and Minsi Indians for the land. The Minsi enjoyed these fertile valleys, hunted in the woods and fished in the "Ramapaugh" or "river of many round ponds". Thus, the Dutch called their settlement "De Panne" or the "The Ponds". 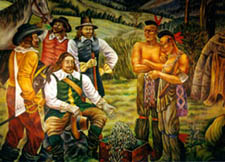 Settlers did not come immediately. It was wilderness, a 25-mile trek from Hackensack along Indian paths that meant at least a day and a half journey. By the year 1710 there were at least ten families in the Ponds. The settlers lived near the Lenni Lenape Indians, called "the tribe of old women" by the Iroquois, and were conquered by them, because they were too peaceful. The Minsi Indians of Oakland were bound to tradition, cared for their aged and were generous with their belongings. They lived in "wigwams" of chestnut saplings covered with bark. Some families were grouped together, but more often a family lived alone by a spring, brook, or the Ramapo River. The first roads in Oakland were the trails they hacked out of the woods for hunting, fishing and visiting one another. Isolation from the rest of civilization was the fate of early settlers who had to make their farms self-sufficient and hope for the luxury of many children to help with the chores. Indian trails were the only roads and few outsiders dared the rough journey. In 1682, Bergen County had set up a road commission to convert the Indian paths into usable roads. However, The Ponds was far away and sparsely inhabited.

Throughout the 18th century, Oakland evolved into a serene farming and lumbering area with numerous mills powered by the waters of the Ramapo River and numerous streams. There were horse paths, footpaths and dirt roads, widened as needed. Signs were few, and when one asked for directions, the answer would most likely be, "Down yonder by the stone house" or "head north to a willow tree, turn right for a good while". Dirt roads were built to lead to Pompton Lakes, Paterson, Hackensack and Suffern. Many had been completed by the mid-18th century with pick and shovel. The stagecoach ran along the Paterson-Hamburg Turnpike and to Ramapo Valley Road through Oakland. Roadhouses, taverns, inns and stables sprung up and became meeting places and sources for news and gossip. The menu could be fish, venison, bear, domestic meat, fowl, or sundry victuals in season. For the thirsty, there was a sweet to hard cider, rum, beer, mead, and whiskey. If the traveler displayed the "beastly vice, drunkenness," he might receive a money fine or be placed in the stocks until he became sober. However, Oakland's settlers were industrious, centering their lives on family and church.

Dirt roads meant mud, flooding, ruts, holes, and in summer, dust. George Washington and his troops knew this only too well. Muddy roads forced him to halt his march and stay overnight on July 14, 1777 at Oakland's Van Allen house. No battles were fought in Oakland, but the 100 families in the valley were in constant fear of British raids. Soldiers, cannons, ammunition, provisions and troops moved along a widened Ramapo Valley Road and along the Ramapo Mountains on the secreted Cannon Ball Road between Pompton Lakes and Suffern. This hidden road was also called "Corduroy Road" because of the log coverings over its swampy sections. It is now a popular hiking trail known as Cannonball Trail and includes a footbridge over Route 287. Oakland's roads were very important supply lines for the Continental Army. Its farms, grist, powder and saw mills were vital. The Dutch had no allegiance or concern for England and gladly supplied the army. The soldiers did not abuse their hospitality. Ramapo Valley Road was a very important connecting line to West Point, especially for couriers with saddlebags of letters, commands, maps and battle plans. George Washington used this route to send messengers with false documents to mislead the British on planned campaigns. 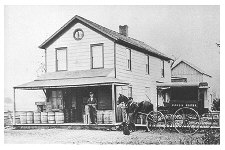 Slow Expansion in the 19th Century

After the Revolutionary War, Oakland tried to settle back into its relative solitude amid the mountains and a life centered on the Ponds Church. In 1740, the log Ponds Church had been replaced by a hexagonal structure. That, in turn, was replaced in 1829 by a stone structure after which our present library was modeled. During this period the church, situated at the southwest corner of the present day Ramapo Valley Road and Long Hill Road, was the center of the town's activity. All roads led there on Sundays for church services, bible classes, meetings, picnics, seeing neighbors and getting the long awaited news and gossip. Dutch mores forbade "reveling" and "night walking" along the roads after 9:00 PM. In 1835, the first bridge was built across the Ramapo River. Previously, one had to find fords in the river in order to cross.

Slowly, Oakland developed northward. A strong factor in determining the center of town was the New Jersey Midland Railroad, arriving in 1869 amid celebrations and denunciations of pollution and "screeching noise." Clearly, the railroad made Oakland closer to other towns and other markets for its farm and dairy products, its charcoal and lumber. Iron Horse Road (off West Oakland Avenue) parallels the railroad tracks and reflects the nickname for the steam locomotive. In 1870, the town's name was changed from "The Ponds" to Oakland. By the late 1800s, Oakland's roads saw the arrival of tourists, vacationers, hunters, fishermen and hikers to take advantage of its river, beaches, ponds, woods, hotels, boarding houses and restaurants. Its roads also carried freight from powder works, a brush factory, a water-bottling plant, numerous mills and small businesses. 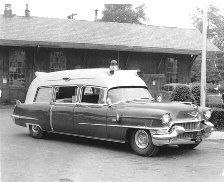 Becoming the "Valley of Homes"

In 1902, Oakland was incorporated and elected its first Mayor and Council. In March of that year, Oakland temporarily became the last stop on the railroad as the Ramapo River swelled to 14 1/2 feet above normal and swept away all bridges between Pompton Lakes and Suffern except for the Pleasureland bridge located near the old Ponds Church. In 1909, the Volunteer Fire Department was founded and Oakland's roads saw a large chemical tank set on wheels, at first drawn by hand, then pulled by a newfangled car. On occasion, it tipped over while rounding corners as the eager volunteers rushed to barn or house fires. Electricity came on August 1, 1916, resulting in the slow loss of the town's water-powered industries. Farming decreased and Oakland's roads hauled less produce and freight as residents commuted to work in nearby towns. By 1927, only three roads had been paved—Franklin Avenue, Ramapo Valley Road (Route 202), and Long Hill Road. In 1929, Bergen County took over Route 202 and its surfacing. Before World War II, most of Oakland's 932 residents were located along these roads and around the present Potash Lake.

After World War II, Oakland began its rapid development of permanent residents as commuting time to work became less and country living became more desirable. In the 1950's, Oakland was a non-farm community, earning its title as “The Valley of Homes”. The first scheduled bus to New York City started service by Short Line in April of 1961. Route 208 was completed in November of 1962 amid fears of hot dog stands, billboards and garages lining the road. With the completion of Route 287’s “missing link” Oakland has become even more accessible, but more vulnerable to pollution and noise.

Click here to view photos and excerpts from the book Images of America: Oakland written by Kevin Heffernan and John Madden.  It celebrates the history of our community from roughly 1860 to 1964.